Audrey Rose Wadsworth and her partner-in-crime-investigation, Thomas Cresswell, are en route to New York to help solve another blood-soaked mystery. Embarking on a week-long voyage across the Atlantic on the opulent RMS Etruria, they’re delighted to discover a traveling troupe of circus performers, fortune tellers, and a certain charismatic young escape artist entertaining the first-class passengers nightly.

But then, privileged young women begin to go missing without explanation, and a series of brutal slayings shocks the entire ship. The strange and disturbing influence of the Moonlight Carnival pervades the decks as the murders grow ever more freakish, with nowhere to escape except the unforgiving sea. It’s up to Audrey Rose and Thomas to piece together the gruesome investigation as even more passengers die before reaching their destination. But with clues to the next victim pointing to someone she loves, can Audrey Rose unravel the mystery before the killer’s horrifying finale?

Hey everyone! It’s been forever since I last wrote a book review!🙈 But I plan on posting more on here now that Uni is slowly coming to an end, so stay tuned!💕

Now on to the review! Escaping from Houdini is the third novel in the Stalking Jack the Ripper series and it is one of my most anticipated books of the year! I was so excited to dive right back into this amazing series and go on yet another adventure with my favourite duo: Cressworth!

EFH picks up right where Hunting Prince Dracula left off. Audrey Rose and Thomas Cresswell are aboard the RMS Etruria on their way to America. Yet soon the luxurious ocean liner becomes a prison, with women aboard the ship being murdered one by one with no where for the passengers to escape. As with every book in the SJTR series so far, Kerri Maniscalco has incorporated the perfect amount of murder, mystery and suspense to keep me on the edge of my seat and constantly trying to guess the killer’s identity! I’m not gonna lie, I even made a ‘Suspect List’, I was that invested in the story.😂 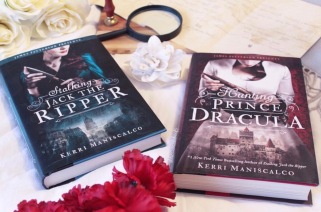 As for my favourite part of this series, the romance, I was a little bit disappointed with how little we got to see Thomas Cresswell. The first 1/4 of the book was great with him and Audrey Rose flirting and bantering, but as soon as ‘he who shall not be named’ stepped into the scene, well…I was not impressed. The attempted “love triangle” fell flat for me, and regardless of how much I ship Cressworth, this particular person I found to be incredibly cunning, manipulative and, quite frankly, annoying as hell.

Another aspect of EFH that I disliked was how Audrey Rose discluded Thomas in just about every plan that she had. I swear, I was pulling out my hair at some points because Cresswell clearly cared about her and wanted to help her but she was always trying to do dangerous things on her own when she should have been working with her partner-in-crime! With that being said, the constant connection and disconnection between Thomas and Audrey Rose made each little moment that they were together all the more sweeter. Rant over.😅

Overall, despite the couple of points I made above, Escaping from Houdini was a really great read and, although I was frustrated at times, I was honestly not bored once during this book. I was constantly on the edge of my seat and so engaged with the story and the characters. EFH is one of the best books I’ve read this year and I can’t wait for the fourth book in the series!💕

Hi there! My name is Abbie and I'm a 19 year old Uni student living in Australia. I'll be using this blog to post book reviews, recommendations and more! When I'm not reading, you'll find me either binge-watching tv shows, writing or taking photos for my bookstagram account! Thanks for stopping by and I hope you enjoy my content! xo
Follow on WordPress.com